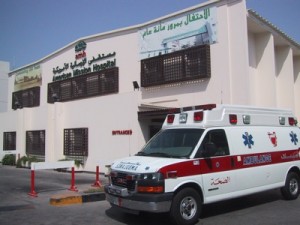 Paul Armerding, MD FACS, spent 22 years at the helm of American Mission Hospital (AMH) in the Kingdom of Bahrain. When he began in January 1988, the hospital had just 9 physicians and a total staff of 70. Approximately 125 patients visited the outpatient clinic each day. When he departed in November 2009, there were 75 physicians, 12 dentists, and a total of 460 staff serving over 600 patients each day spread between 2 locations.

In November 2006, AMH was surveyed by the Australian Council on Healthcare Standards International and was awarded hospital-wide accreditation in March 2007. An interim survey in November 2008 reaffirmed accredited status. A full survey was repeated in 2010. AMH was the first hospital in the Kingdom of Bahrain to achieve international accreditation and continues to develop under Paul’s successor.

When Paul assumed his role at AMH in 1988, the hospital was still a direct ministry of the Reformed Church in America (RCA). However, in March of that year, by ministerial decree, the hospital was organized as a Bahrain non-profit society governed by a local Board of Directors. While some aspects of the prescribed governance have proven awkward, the overall arrangement has been made to work and been supported by the community. Above all, AMH has been an example of transparency and good governance practices in a context where the role of non-profit service organizations is not yet well-understood. Therefore, in addition to his executive role at AMH, Paul has also become an advocate for the development of civil society organizations in Bahrain.

Medical Compass is a registered second name for Arabian Gulf Connection, Inc. which is an IRS-approved 501.c.3 non-profit, tax-exempt organization. All gifts are tax deductible.